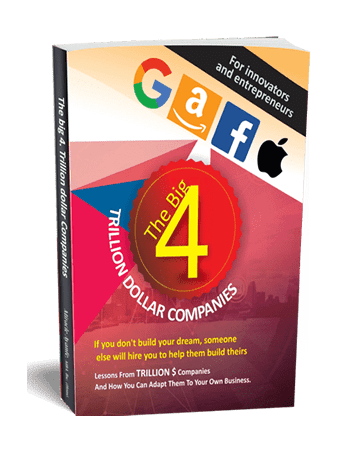 (If you don’t build your dream, someone else will hire you to help them build theirs.

Lessons From TRLLION $ Companies And How You Can Adapt Them To Your Own Business.

In this book you’ll have a sequential analysis, practical examples and understanding of the World’s Most Successful Companies and their business models.

Who is this book for ?

This book is for Innovators and Entrepreneurs

It is clear that the world of business, like every other aspect of modern life, is changing quickly, but if a company has a business model that’s remained unchanged for decades, how are they going to adapt to thrive in this new digitized world?

The purpose of this book is to assist entrepreneurs perform, compete and excel, particularly create awareness of the extraordinary change that has come in the form of the digital revolution, a revolution that some have used to create Trillion-Dollar Empires. In record-breaking time, they have harnessed the power of digital platforms to reinvent industry business models to win over new customers and digitally enable people to swap information, assets, opinions, services, content and ideas.

At a glance, it may seem like the world’s biggest technology companies have a lot in common.

For starters, all five of the Big Tech companies (Amazon, Apple, Facebook, Microsoft, and Alphabet – Google) have emerged as some of the most valuable publicly-traded companies in the world, with founders such as Jeff Bezos or Bill Gates sitting atop the global billionaire list.

These tech giants also have a consumer-facing aspect to their business that is front and center. With billions of people using their platforms globally, these companies leverage user data to tighten their grip even more on market share. At the same time, this data is a double-edged sword, as these same companies often find themselves in the crosshairs for mishandling personal information.

It wasn’t that long ago that one billion dollars was considered an astounding amount of money; an amount that no business could hope to earn. There was a time when one billion seemed too farfetched.

With so many companies boasting these earnings, it only makes sense that CEOs would be turning their attention to a new financial goal: hitting a $1 Trillion valuation. So far in modern day history, three companies Apple, Amazon and Microsoft has hit this capitalization value, while the fourth, Google is very close to hitting the mark.

A whole chunk of this book is focused on Apple, Amazon, Google and Facebook who have generated unprecedented wealth and inspiration.

In the broadest sense, three of the technology giants (Apple, Microsoft and Amazon) make money in the same way: you pay them money, and they give you a product or service. You are the Customer.

Whilst both Alphabet (Google) and Facebook also generate billions of dollars of revenue, but they make this money from advertising. Their platforms allow advertisers to target you at scale with incredible precision, which is why they dominate the online ad industry. You are the Product.

This book will inspire you to adapt some of the strategies, business lessons and philosophy from these juggernauts to Accelerate Growth And Transform Your Business Digitally.

In this book you’ll have a sequential analysis, practical examples and understanding of the World’s Most Successful Companies and their business models.

The Big Four, Gang of Four, GAFA, or Big Tech are names used to describe the four multinational online service or computer and software companies that have dominated cyberspace since the 2010s: Apple, Amazon, Google and Facebook.

▪ Microsoft became the third US company to pass a market capitalization of $1 Trillion.

▪ Google joins the race to $1 Trillion. Google is already worth more than $900 billion and, while well short of Apple, is now jumping into that batch of companies that are on their way to being a $1 Trillion company.  Google’s advertising business continues to be healthy and growing.

It is interesting and inspirational to learn how the Big 4 hugely successful technology companies worth Trillions of dollars started and grew to the behemoths they are today.

Learn how you can adapt the same strategy and business philosophy to revolutionize and grow your own empire.

Plenty of inspiration can be gained from these and other successful companies; today’s startup could be tomorrow’s Amazon or Apple.

When the world is changing, it’s time to change your world.